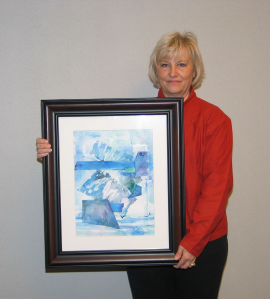 With an abstract collage on Yupo

As I young child I loved to draw and spent hours sketching horses and designing  paperdolls. I completed my first painting for a 4-H Craft project. As an adult I fell in love with the beauty of watercolor and spent years as a weekend artist. I was finally brave enough to exhibit for two years at the Riley Days Festival in Greenfield, Indiana and was lucky enough to win several awards in drawing and painting. In 1994 I started work on my Masters degree and was forced me to stop painting.

In February, 2007, after fourteen years of inactivity, I picked up a brush again. I now paint because I love to paint and I realize that I am just at the beginning of a rewarding and challenging journey. I have so much still to learn. I do however have a philosophy. I do not want to hit the viewer over the head with a message. I just want to share my love of watercolor with its pure, luminous color – its brilliance and delicacy. Renoir said it best,

“A picture must be an amicable thing, joyous and pretty – yes pretty! There are enough troublesome things in life without inventing others.”