Tomorrow I have my last Life Drawing Studio for this 5 week session. It has been a very different and valuable experience and I will enroll again later in the year. Probably the most beneficial thing is that I set aside 3 hours once a week for drawing.

I love to draw. I always have. I remember drawing  when I was in fourth grade and received a John Nagy  drawing set (obviously I was already drawing or I would not have received the set!). I used to create all of my own paper dolls copying stylish clothes from our Sears Roebuck catalog. I even buffed the surface of the paper with my finger to create the look of fur when I gave my doll a leopard fur coat. (not sure that Sears carried fur coats!)

During this last session I used all of the 2 minute warm ups for blind contour drawing and I also “blocked” my figure first hoping to improve the proportions of my figures. I felt like my drawings were better (though still imperfect). One thing I know…the human body is one of the most difficult things to draw!

This studio is at 9 am on Monday mornings. I call it my Nudes at 9 time… 🙂 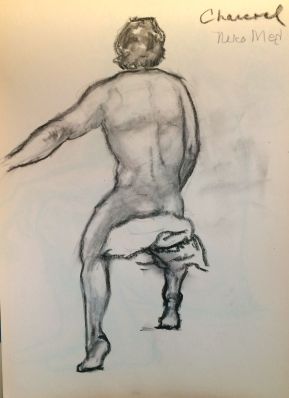 Recently I have been struggling with motivation. I decided that taking a class might add the incentive to be more disciplined so I registered for a Life Drawing Open Studio. We had our first session yesterday and I really enjoyed it. My mindset is that this class is just for fun and I can sketch what and how I want but I did learn very rapidly the importance of placement in the room. Need to get there earlier next time! I am not going to post everything I did yesterday but thought I would post a couple.

Both are 15-20 minute sketches on newsprint. In a life drawing class it is rather unusual to do a portrait but I thought I would give it a try. Here is the result…

I’ve been doing some sketching and I love to work with faces. My first is done with black and gray Sharpie markers.

and the next one is just graphite pencils. Both are in my little 6″ X 9″ sketchbook.  Both are inspired by photos in the latest Smithsonian magazine.

This has been a really hard few weeks. Not only was Ken in the hospital for a week but we lost one of our dogs. She was a little, four pound toy Pomeranian and a cutie, cuddly, snuggle bunny. AND a very independent cuss. She was over 12 and had Cushings when we adopted her two and a half years ago. We were able to get it under control and she was a very special little character.

Ken started chemo yesterday. He didn’t recover well from his time in the hospital so the oncologist said “it’s time but it’s your choice”. The infusion yesterday went off very well. The low point for red and white cells is at about days 7 through 10. The pharmacy was running 2 hours behind so I had time to do some sketching while we waited.

This time I did sketches of Red Delicious apples from a Whole Living magazine.  These were done with a BIC mechanical pencil in a 5″ X 7″ sketchbook. 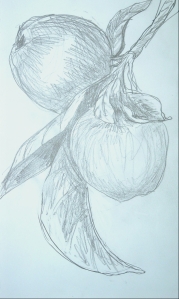 WOW what a week…our biggest problem…a contractor was working on our roof in a high wind and his ladder crashed down taking out our cable, phone service and internet. Do you realize how much we depend on our phone and internet? I did use my cell to report the problem and schedule the repair…anyway we are finally back in communication with the outside world.

I had time to do a couple of small drawings while “out of touch”. We were in the office of Ken’s dentist who is an avid advocate of the Chicago Institute of Art. He had a book on the coffee table that described the origins of the museum. A driving force was Francis Hutchinson and her husband. I thought this early photo of her presented a face both sweet and curious so I couldn’t pass it up. 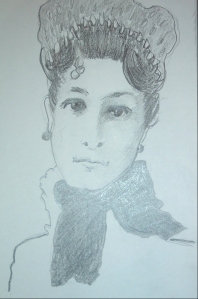 Later the same day I was reading an article in the monthly magazine published by the Indiana Historical Society. The article was about the Ninth Indiana Infantry Regiment which was one of the original 3 month volunteer regiments later recommissioned to a 3 year regiment. They were active during the entire war and gained renown for their experience, bravery and effectiveness. I used a photo of one of the leaders of the regiment to set the outlines for this drawing but the eyes, nose and attitude are all mine. Hope you enjoy!

I have really been out of touch for the last few days and missed all the activity on WordPress. I have been prepping for a new show at Orchard Park Presbyterian Church In Carmel, Indiana. Yesterday afternoon we hung the show and the contact, Rachel, at the church was incredibly experienced and supportive.

They have two 13 foot hanging strips and my show includes 18 watercolor and 1 acrylic paintings, one ink drawing and one graphite drawing. Two small paintings are displayed on a lovely side table along with information about me and my guest book. The show is a mix of my older work and my recent paintings that are inspired by Ken’s battle with prostate cancer. The show will hang for two months. Ahhh, now I can sit back and relax for a day or two!

A better shot of just a few of the paintings hanging

On November 11th I posted a discussion of my Geometry paintings. Keith followed up with a question about how I developed the design so I looked through some of my sketchbooks to see what I could find to do a show-and-tell. First of all it begins when I decide which shape – circle, square or triangle – I want to work with. Then I begin to doodle and sketch ideas.

Working sketches for a Triangle based painting

I usually sit watching TV and doodle as I watch. You can see how really terrible some of the ideas for the triangle were but I don’t censor myself. I even tried combining a triangle with other shapes. I just keep working at this process until I find something that seems close to what I want. I then do a more refined drawing – still small and not ruler perfect but close to the real thing.

This page from my sketchbook actually shows two things. First it includes my to scale planning drawing for my circle painting. It is colored with colored pencils so I can work out the best color plan and you can see two prismatic color approaches below the completed drawing. It also shows my “getting close to being final” design for the triangle painting. I have started to think about a larger set of paintings but I still need to do an 8″ X 10″ triangle to complete my set of 8X10’s. Better get to it!

Well here’s the good news and the bad news. First the bad…neither of my submitted watercolors were accepted for the Watercolor Society of Indiana’s Juried Show. This competition had over 175 entries for 52 spots. I am sad but I will keep trying!

Now the good news…seven of my eight submitted works (three watercolors, one acrylic abstract and three drawings) were juried into the professional arts competition at the Indiana State Fair and both of my submitted works were accepted into the National Abstract Show. This show had over 130 entries from 17 states and I am not sure how many were accepted. Last year’s show probably had 35-40 in the show but that is just my estimate. Anyway here are the two entries that were accepted for the abstract show. 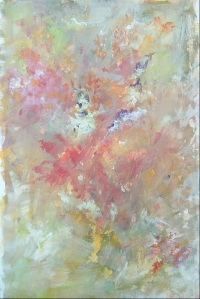 Carnival is acrylic on a half sheet of Yupo Paper and White light is acrylic on a full sheet of Yupo and I had it framed so it can be hung either horizontally or vertically. Originally I thought I would hang it horizontally but now I prefer vertically. I (IMO) think both are equally nice. Both paintings are matted and under glass and White Light has a lovely frame that was recommended by my framer who gave me a great deal on it.

The doodling continues…I really feel the need to play and not do anything serious. Just being lazy in this extreme summer heat. I pulled out a magazine and sketched this with my colored pencils. I was fascinated by the Christmas tree like shapes of the floating ice. 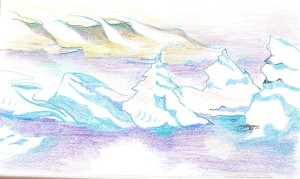 Later I sat thinking about how I could abstract this and I thought of the minimalist work done by Donald Judd, which I really enjoy. I came up with this simple little guy… 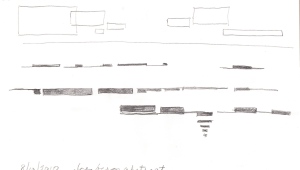 I always feel guilty and lazy goofing around like this but I hope this is the break that refreshes! I just finished reading a little book called The Blank Canvas: Calling the Muse and again, as many times before, I heard that the key is to keep putting pencil to paper, paint to brush…JUST DO IT! So I am…

Yesterday was beautiful…I planted pansies and sat at my patio table to paint ATC’s. I decided to start with an ATC of the blossoms from my crabapple tree. They are in bloom for such a short time I thought I had better be quick or I would lose my chance. I may work on a slightly larger painting today. Maybe…

Then I decided to do another ATC of a toy belonging to my grandchildren. This one was really fun…thinking of my rowdy, all boy grandsons, I called it Bam Bam 1.

Both were painted on Strathmore Watercolor ATC paper with transparent watercolor and to the music of the birds in the background.